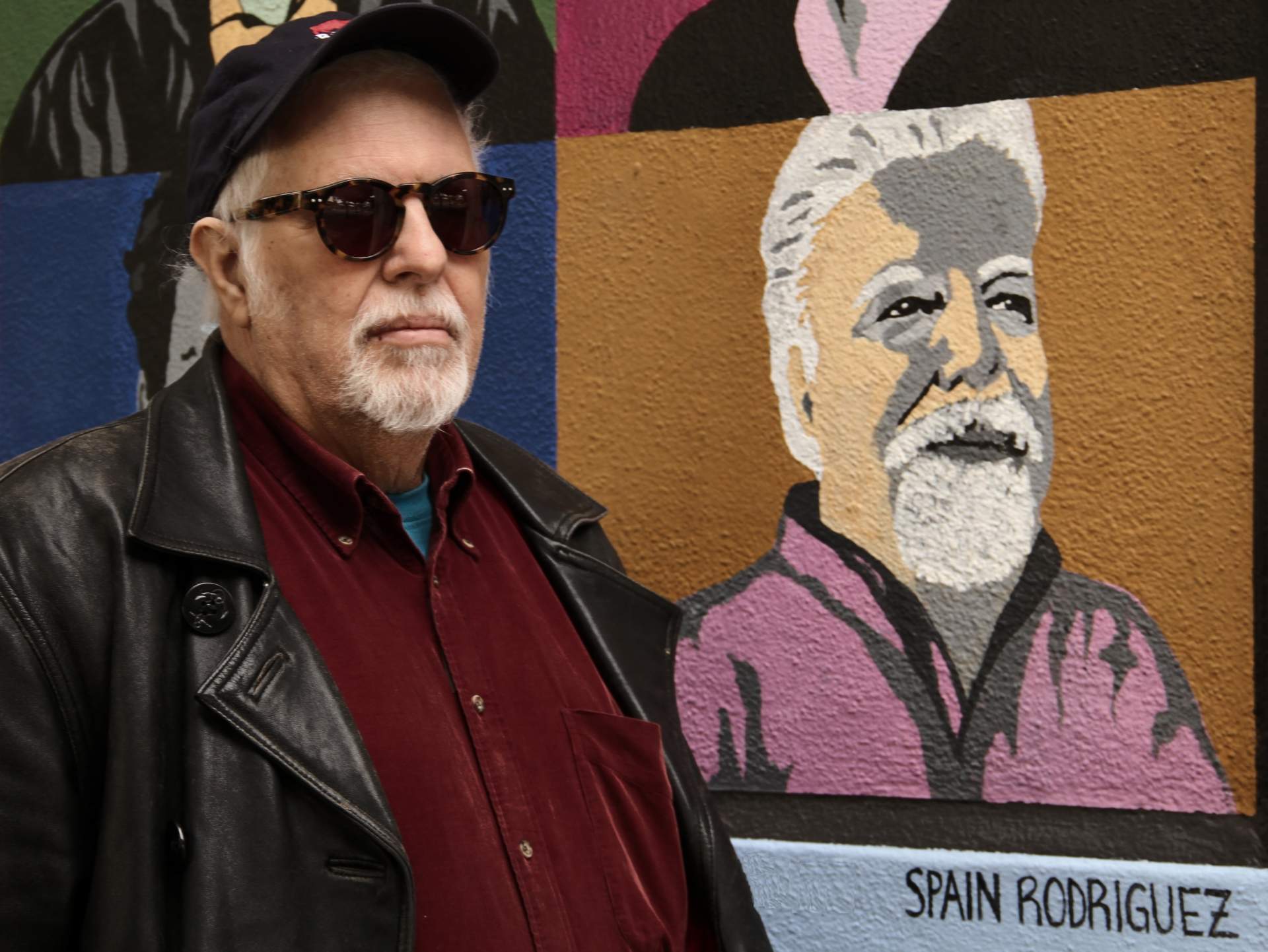 Manuel “Spain” Rodriguez was born in Buffalo, New York on March 2, 1940. He grew up on Buffalo’s East Side, a gang member of outlaw cyclists the Road Vultures. Listening to legendary rock ‘n’ roll DJ George “Hound Dog” Lorenz and enjoying epic bar brawls and street rumbles that he would later illustrate in full-page panels and two-page spreads while employing his signature (and influential) comic-book aesthetic, the work holds its own with iconic graphics of battle.

Spain never stopped being an outlaw biker. He also never stopped drawing comic panels. At 19 he decided to try out at Silvermine School of Art in New Canaan, Connecticut. He didn’t graduate, but returned to Buffalo to work at the Western Electric wire-making plant in industrial Tonawanda. With frequent Harley Davidson trips to New York, he was captured by the city’s fast life. He moved to the East Village and during the late 1960s, he became one of the first contributors of comic strips to the East Village Other, the notorious underground tabloid, which also published Spain’s own comic books, such as Zodiac Mindwarp (1968).

From NYC, he followed the counterculture to San Francisco, where he became a prominent member of the Zap Comix group that included R. Crumb, S. Clay Wilson, and others. A committed radical and founder of the United Cartoon Workers of America, Spain contributed to numerous underground comic books and anthologies (including Blab) in the decades since, and created the serialized, online continuing graphic story, The Dark Hotel, which appeared on Salon.com.

His recurring characters include The Trashman (an action hero of the left, battling a repressive state in a dystopian future) and sexually powerful (and powerfully sexy) Big Bitch (authored under the pseudonym “Algernon Backwash”), both of which have been collected in anthologies published by Fantagraphics.

Fantagraphics also published My True Story, a Spain anthology combining his autobiographical stories about growing up in Buffalo and his years as a proud and loyal member of the Road Vultures with illustrated stories. Adding to the history of wars and revolution, an increasing interest in recent years, he has created an illustrated biography of Marxist revolutionary Ernesto "Che" Guevara, Che: A Graphic Biography (2009). Published in several different languages, Che has been described by comics master Art Spiegelman as “brilliant and radical.” His most recent publication is Cruisin’ with the Hound, containing more autobiographical stories about Buffalo in the ‘50s and ‘60s.

"Spain has been a cartoonist for more than 40 years, one of the first and most visible and influential storytellers of the underground comix movement. While others were preoccupied (often brilliantly) with their X-rated tributes to Harvey Kurtzman, Max Fleischer and other visionaries of their childhood, Spain was telling adventure stories of urban America, often featuring his character Trashman."
- Mike Gold, www.comicmix.com, 2008

"Spain paints his most convincing portraits not of individuals but of groups. In his motorcycle club stories, for instance, you learn very little of the personalities of any individuals, but a great deal about how they function as a group."
- R. Fiore, Writer, Editor

"Cruisin’ With the Hound is a splendid book, a startling view of a plebeian world that tends to be submerged by the North American tendency to pretend that class doesn’t exist."
- Jeet Heer, The Comics Journal

"While Pop Art defied the puritanical modernist tradition in painting by focusing on "kitsch" subject matter and abandoning any painterly quality of a man-made image, the underground comix genre was breaking as many rules as it could in the comic book world. Explicit sex, violence and very adult, generally satirical subject matter were typical defining traits of this fresh movement."
- Jon Ascher, Writer, Graphic Artist

"Comic-Con International (Comic-Con), the largest comic book and popular arts event of its kind in the world, has announced that the Eisner Awards judges have selected two individuals to automatically be inducted into the Will Eisner Comic Awards Hall of Fame for 2013. These inductees are Golden Age artist Mort Meskin (Vigilante, Wildcat, Johnny Quick for DC) and the late underground cartoonist Spain Rodriguez (Trashman, Nightmare Alley)."