What is Regional Art?

When the Charles Burchfield Center was created on December 9, 1966, its founding statement established Charles Burchfield as the sole subject of exhibitions, study and collection development, stating that it “will feature continuous exhibits of significant works by the artist, including paintings and sketches as well as his journals and writings, together with publications concerning him and comprehensive photographic records of his work.” The exhibitions presented during the first two years, following the artist’s death on January 10, 1967, were exclusively on Charles E. Burchfield. In 1968, a Burchfield family exhibition showed Three Generations of Burchfield Painters: Works by Charles E. Burchfield, Martha Burchfield Richter and Peggy Richter. Then, in February 1969, the Charles Burchfield Center presented its first solo exhibition about another Western New York artist, a retrospective “community tribute” to Harold L. Olmsted. It signaled a new era in which both Burchfield and regional artists would be presented. A two-paragraph statement published at the end of the exhibition catalogue reads virtually the same as the original mission.

Edna M. Lindemann, listed as Curator at the time, always maintained that Burchfield wanted the Center to serve other Western New York artists. Although no written record of this statement has been preserved or uncovered from original documents, these sentiments seem to have come into play in presenting the Olmsted exhibition and the history of various exhibitions that have followed. Developments in the collection parallel this strategy. In 1966, all acquisitions were Burchfield works except for one painting by Robert N. Blair. In 1967, 1968 and 1969, all acquisitions accepted by the Center were by Burchfield; however, during those same years, works by other artists were donated to the BSUC Foundation. In 1970, three photographs by Wilbur H. Porterfield became the first acquisitions by Western New York artists other than Burchfield. 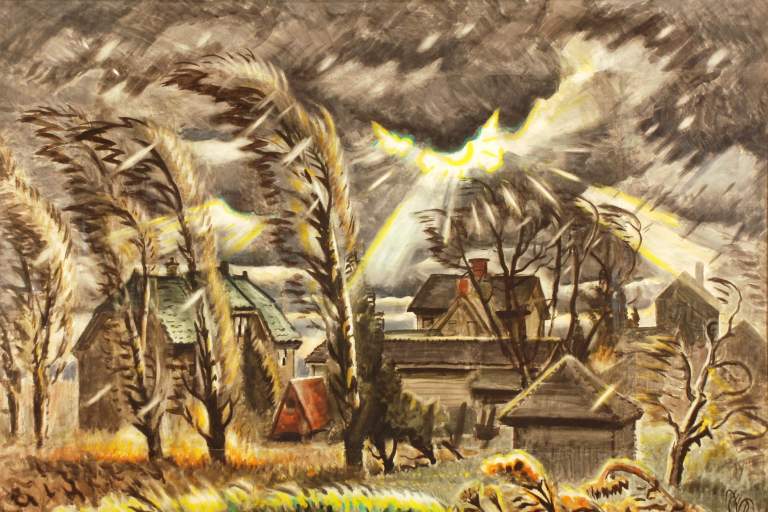 What is Western New York Art? By Nancy Weekly, Head of Collections and the Charles Cary Rumsey Curator

Before attempting to describe the extraordinarily rich and diverse range of art created by artists of Buffalo-Niagara and Western New York State, and how it is represented in the collection of the Burchfield Penney Art Center, we need to define Western New York.