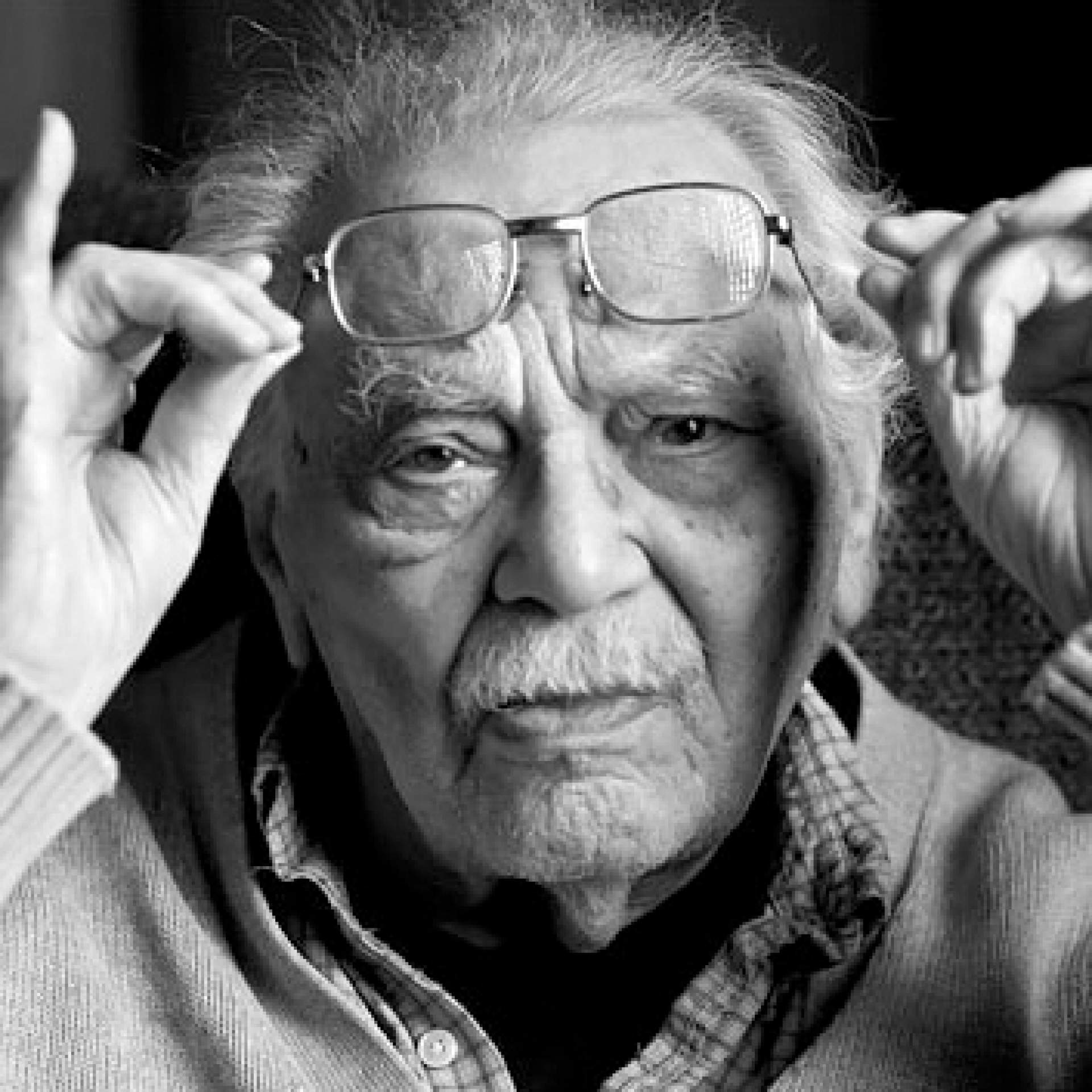 Milton Rogovin is internationally respected as one of America’s finest social documentary photographers. The directness and underlying compassion in his work is often compared to Lewis Hine’s and Jacob Riis’s early twentieth-century photography.

Rogovin was born in 1909 in New York and graduated from Columbia University in 1931 with a B.S. in optometry. Intrigued by issues of social justice and the inequalities of the Great Depression, he took courses at the Communist Party-run New York Workers School, read the Daily Worker newspaper, and was introduced to the work of Hine and Riis.

He moved to Buffalo, N.Y., in 1938, where he established his own optometric practice on Chippewa Street a year later. In 1942, he married Anne Snetsky, purchased his first camera, and was inducted into the U.S. Army, where he served in England as an optometrist. Upon his discharge in 1945, he returned to his practice and to start a family. He became a member of the Buffalo chapter of the Optical Workers Union and served as librarian for the local branch of the Communist Party.

In 1957 Rogovin was called before the House Un-American Activities Committee. A subsequent Buffalo Evening News headline about his refusal to testify tagged him "Buffalo's Top Red" and the persecution that followed significantly impacted his business and his family. Rogovin later stated that although his voice had been silenced, he would not be silenced. He demonstrated this in 1958 when he picked up his camera in earnest and began making images that communicated his deep desire for a more just and equal society.

Rogovin’s first major photographic project involved documenting the storefront churches in the African American community of Buffalo, an endeavor that gained him publication in the journal Aperturewith an introduction by W.E.B. DuBois. Over time his work took him around the world as he focused on what he called “the Forgotten Ones”: working class residents of Buffalo’s Lower West Side, Chileans (a collaboration with poet Pablo Neruda), miners, steelworkers, citizens of Appalachia, Native Americans, and members of Buffalo’s Yemeni population, among others. He shot many of them both on the job and at home, offering his subjects no instruction about how to dress or pose as they stood before his vintage Rolleiflex camera, the sessions invariably in black and white. For their participation, his subjects received a high-quality print of the finished portrait. He returned to the West Side of Buffalo to photograph the same families three or more times over three decades, leading to the exhibition and accompanying book Triptychs.

Throughout Milton Rogovin's career, his wife Anne was his collaborator, organizer and companion. Over the course of fifty years and across five continents, Anne worked alongside Milton in his photographic ventures while pursuing her own full-time career as a special education teacher, author, activist, and mother. Anne's most valuable traits were her unassailable good nature and her diminutive appearance, which opened the doors of many homes that might ordinarily be wary of a man with a camera.

Rogovin earned an M.A. in American Studies from the University of Buffalo in 1972, where he taught documentary photography until 1974. In 1976 he retired from his optometry practice to concentrate full time on photography. In subsequent years he exhibited his work in Finland, Sweden, Greece, Norway, and the Netherlands while continuing to travel the world shooting more photo series. In 1994 he received honorary degrees from both the University at Buffalo and Buffalo State College; in 1996 the Getty Center in Los Angeles acquired 83 of his photographs, and in 1998 the Library of Congress obtained 1,500 examples of his work, making him the first living photographer since the 1970s whose prints and negatives are archived as a national resource. In 2009 the LOC acquired 20,000 pieces of his correspondence along with 200 photographs taken during WWII. The irony was not lost on him that the very government that persecuted him in the 1950s now celebrated his defiant work as a champion of the poor and working class half a century later.

Other major institutions with sizable holdings of Rogovin’s photographs include the J. Paul Getty Museum in Los Angeles, California, the Center for Creative Photography at the University of Arizona Libraries and the Milwaukee Art Museum in Milwaukee, Wisconsin. (See below for information about the Burchfield Penney Art Center’s acquisition of 900 photos and archival materials.)

Rogovin died in 2011 at the age of 101. Throughout his accomplished photographic career, his work appeared in greater than 160 journals, magazines and other publications. He participated in more than 30 group shows and 60 solo exhibitions, and had eleven books published on his photography. Additionally, a documentary film was made about his life and photography.

Selected online resources for Milton Rogovin:
*his website: http://miltonrogovin.com/
*his obituary in the Guardian:  http://www.theguardian.com/artanddesign/2011/feb/01/milton-rogovin-obituary
*his obituary in the New York Times: http://www.nytimes.com/2011/01/19/arts/design/19rogovin.html
*a gallery of images from the Getty: http://www.getty.edu/art/gettyguide/artMakerDetails?maker=3637&page=1
*a biography and detailed, searchable list of holdings from the Library of Congress: http://www.loc.gov/rr/print/coll/238_rogo.html

The Milton Rogovin Collection at the Burchfield Penney Art Center

Milton Rogovin (December 30, 1909-January 18, 2011)
For more than fifty years, social documentary photographer Milton Rogovin captured a vital portrait of American life—the contributions of working and everyday people in the United States. Rogovin’s world view was forged by the Great Depression, when he learned that the contributions of average Americans built our cities and towns; yet the people remained largely unnoticed in our society. He dedicated his life to celebrate those he saw as “The Forgotten Ones” and in the process he created an artistic and historic legacy for future generations.

The Burchfield Penney Art Center has one of the largest collections of Rogovin’s work—1,113 photographs that span his career—because the artist believed it was crucial to have his work accessible in the city where he and many of his subjects lived. The comprehensive collection, which includes examples of nearly every series he created, is described more fully below.

The Center for Creative Photography at the University of Arizona in Tucson has the largest collection of prints, comprised of 4,000 photographs, which it plans to make accessible online in the future. (http://www.creativephotography.org/files/finding-aid-pdfs/ag210_rogovin_0.pdf)

The Library of Congress describes its Milton Rogovin Collection as consisting of “approximately 30,000 images (shown in about 29,700 black-and-white negatives, 2,500 contact sheets, and 1,130 signed prints), reflecting the full scope of Mr. Rogovin’s six decades in photography. The collection includes his photographs of Buffalo's Lower West Side and the "Family of Miners" series. It also features thousands of images that have never been published--among them photographs of the Yemeni, Chileans, steelworkers, and Native American reservations in upstate New York.” (https://www.loc.gov/rr/print/coll/238_rogo.html)

Adversity motivated Rogovin’s personal pursuit of documentary photography.  In 1957, he was called before the House Un-American Activities Committee and declined to answer questions.  As a result, his optometric practice was curtailed and his ability to participate in the civic life of Buffalo limited.  He had a choice: to remain silenced or to speak through the lens of a camera.  In a truly courageous act, he chose the latter; and as a result our country now truly has a repository of its history and its citizens.

Rogovin’s humanitarianism took him many places.  In 1961, the distinguished African American scholar W.E.B. DuBois introduced Rogovin’s three-year series on “Storefront Churches” in Buffalo, New York, when it was published by Minor White in Aperture magazine.  Noble Laureate Pablo Neruda illustrated a book of his poetry with Rogovin’s photographs of Chilean working people, after the two met in 1966.  Rogovin worked with experts on black lung disease to document the working conditions of miners in “Appalachia” from 1962-1987.  Rogovin’s series of Native Americans is the only record of Native peoples taken in Western New York from 1963-2002.  His best known series, “Lower West Side,” documents a six-square block, ethnically diverse neighborhood in Buffalo, for which he photographed residents every ten years over a 30-year period.  His resulting triptychs supply an aesthetic and sociological narrative on the inevitable changes in individuals’ lives over the passage of time.

Rogovin is also known for his series “Working People” in which he portrays the dignity of workers at work and at home. This technique is also employed in his “Family of Miners” series, which was supported by the W. Eugene Smith Memorial Fund Award for Documentary Photography in 1983. Rogovin captured the professional and domestic lives of miners in ten nations, including a rare look into the lives of U.S. women miners.

Recognized as one of the century’s most distinguished social documentary photographers, Rogovin received the Cornell Capa Award for Distinguished Achievement in Photography from the International Center of Photography in 2007.  He is the first photographer since the 1970s to have his archive accepted by the Library of Congress, in part because he illuminated important social issues in a crucial slice of American life between 1959 and 2002 that otherwise would have gone unrecorded.

Milton Rogovin’s work has appeared in more than 170 publications and 9 books. He has had more than 60 solo exhibitions and his photographs are in the collections of more than two dozen museums around the world, including the Center for Creative Photography at the University of Arizona in Tucson, J. Paul Getty Museum in Los Angeles, Museum of Modern Art in New York, Bibliothèque Nationale in Paris, Victoria and Albert Museum in London and Burchfield Penney Art Center at Buffalo State College.  A dedicated husband, father, optometrist and veteran, Rogovin lived a selfless life, trying to make the world more compassionate, more just.  Not only has he made Americans proud, he has placed them within the global community.

The Milton Rogovin Collection at the Burchfield Penney Art Center

The collection started with 8 works: 6 purchased with funds from the Collectors Club in 1992; 1 donated by Charles Rand Penney in 1992, and 1 donated by Cecile and Steven G. Biltekoff in 2000.

The Milton Rogovin Archives at the Burchfield Penney

The Burchfield Penney Art Center is home to a large Milton Rogovin archive. Material has been donated by local collectors and friends of the artist as well as by the Rogovin Collection, LLC, and by Milton and his wife Anne themselves. The archival collection contains hundreds of items such as signed ephemera, newspaper clippings, local, national and international reviews, features, and exhibition flyers. The collection also holds awards and diplomas given to both him and Anne, notes and copies of Anne’s work, slides, films, interviews, and correspondence.

Objects of note include the artist’s photography equipment such as a Rolleiflex camera, his preferred camera over the eight decades of his photography career. Some of the dark room equipment in the collection includes spot toners, along with the artist’s kit for using them, the scale he used to measure chemicals, and developing trays. These items exemplify the striking similarities between the tools he used for photography and those used for his optometry practice and bring to mind other parallels the two professions maintain.

There are also personal items, such as the artist’s flat cap, which he was often photographed wearing and a self-portrait from 1943 in military uniform. Rogovin saved comment books from his exhibits over the course of his career and these are available in the archives. They offer interesting insight into the changing times and views of visitors as his career progressed.

The archive contains an audio reel of Bertolt Brecht’s interview with the House Un-American Activities Committee in 1947. Rogovin was heavily influenced by Brecht’s beliefs and was known to recite key lines from his poem "A Worker Reads History" (1936) at lectures, interviews, and other occasions.

In his lifetime, Rogovin submitted several proposals to municipalities for the use of his images in public spaces. The archive holds proposals for both New York City and Buffalo: the New York City Queens Supreme Court Project of 1996, a photo mural for the Buffalo Humboldt-Hospital Station in 2010 and an undated portfolio for photo monuments on Niagara Street in the Lower West Side. Though these proposals were ultimately rejected, they highlight the artist’s ongoing drive to contribute to and enhance the public sphere.