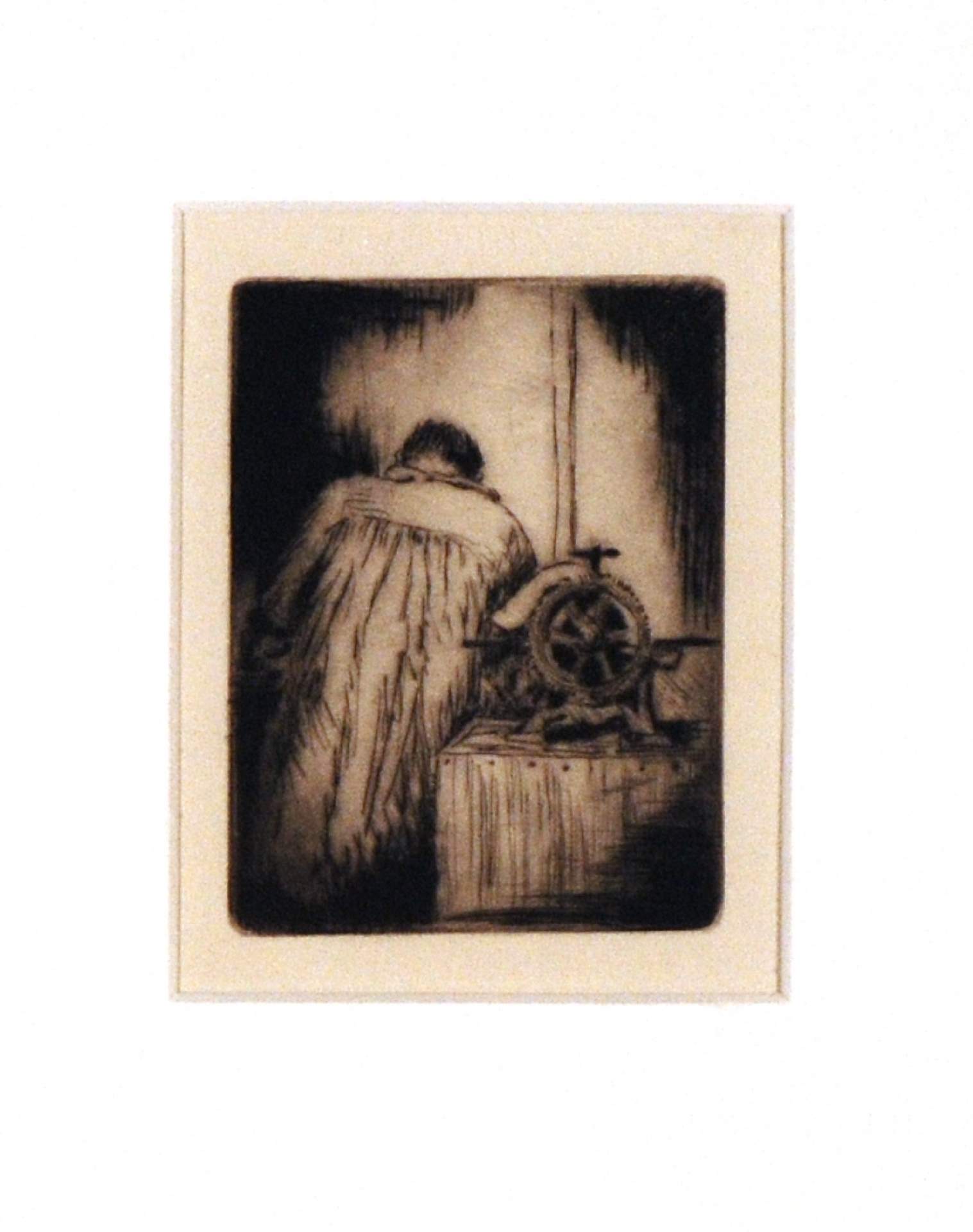 Kevin B. O’Callahan (1902-1977) was a graphic artist & designer, printmaker, craftsman, painter, teacher, lecturer, writer, and furniture designer. O’Callahan was primarily known for working in various intaglio & engraving processes including etching, wood engraving, woodcuts, linocuts, and lithography. He was born in Buffalo, NY, February 14, 1902 and was a lifelong bachelor and resident of the city. As a printmaker, O’Callahan was a founding member of the Buffalo Print Club in 1931 and served as president until about 1952-53. Over the course of his career, his work ranged from fantasy watercolors in the 1920’s, along with etchings and theatrical stage designs which were influenced by Art Deco, Art Nouveau, Asian, Arabian, Persian and American Arts & Crafts designs and motifs. In the 1930’s he moved towards more traditional black & white woodcuts and etchings and was later known for his industrial prints of landscapes done along Lake Erie. As a true precisionist, his later work presented a superior portrait of Western New York at the height of its industrial age, and critics applauded his efforts. He was also a member of the Buffalo Society of Artists (BSA) and later the Patteran Society in the early 1930’s, both located in Buffalo, NY. He was also a longtime friend of fellow artist Andrew Wyeth (American, 1917-2009) who was his neighbor at his summer home in Thomaston, Maine. Over the course of his career O’Callahan won national acclaim in many different graphic mediums, and his work can be found in regional and national museums & galleries, as well as private and public collections worldwide.

O’Callahan initially studied at the Technical High School in Buffalo, NY, with the intention of becoming an engineer. Beginning is 1920, he studied at Carnegie Mellon Institute of Technology in Pittsburgh, PA, and within two years, he switched his path from engineering to commercial art. Though his early training was in technical engineering and commercial art, his printmaking skills were largely self taught.

“I never had any courses in printmaking and have had to work much of it out for myself or from books. This has not been a very satisfactory way of learning lithography.”[1]- Kevin B. O’Callahan

In 1931, with guidance from O’Callahan, many of Buffalo’s finest printmakers came together to form the Buffalo Print Club. They met in the basement of the Albright Art Gallery (now the Albright-Knox Art Gallery). Around 1940, the club moved into O’Callahan’s home located at 620 Niagara Street in the city. At its peak in 1943, there were only 21 active members in the club. Of all the club members, Kevin O’Callahan was perhaps the finest printmaker and served as president of the club from its inception to about 1952-53. “Kevin B. O’Callahan initiated leadership for printmakers in the Buffalo area—those artists who, up to this time, struggled to gain equal recognition with painters and sculptors. O’Callahan single-handedly created the Buffalo Print Club and remained its driving force for more than twenty years. Under his direction, the Club developed its mission: to share expertise with colleagues, to have a place to fraternize and discuss ideas, and to make mutual use of a printmaking studio with its presses, chemicals and equipment.”[2] Not only did he exhibit in all of the club’s annual exhibitions, he also participated in numerous club exhibitions in various other national locales and venues.

“He worked meticulously and criticized other printmakers for slighting the technical aspects of their craft. He believed that such neglect greatly diminished much contemporary printmaking. O’Callahan worked from carefully made sketches, and developed his perspectives from tracings. Often, he worked from memory, relying on his thorough knowledge of the subject. Most of the exquisite shipbuilding prints fall into this category. At other times, especially when doing rural landscapes, he worked from sketches made on the spot.”[3]

“Good craftsmanship is a much neglected phase of all art today. Too many artists do not take the time to learn their trade.”[4]-Kevin B. O’Callahan

Two other prominent artists that stood out in the club with their dedication to their craft were: Master draughtsman, Niels Yde Andersen (1888-1952) known for his etchings and often referred to as the most artistic of the printmakers, and William J. Schwanekamp (1893-1970) who is best known for his Buffalo Alley series. More can be read about the club, its members and their exhibition history on our Buffalo Print Club page.

Circa the 1930’s, O’Callahan spent the summers vacationing in Thomaston, ME, where he enjoyed sketching the shipyards and docks. He was greatly fascinated by the craftsmanship of the boatbuilders, and produced a series of study sketches from the initial phase of hull construction to the finished boat, later creating etchings and wood engravings from the drawings. One particular print O’Callahan prized titled, “Ship’s Skeleton” (Plate V) was later featured in the book American Prize Prints of the 20th Century, by Albert Reese, (1949). He liked the subject matter of wooden shipbuilding and its craftsmanship because it offered excellent possibilities for interesting patterns and also because it was something that was constructed. His shipbuilding prints are elegant examples of his wood engraving skill, which offer a stark contrast between the high whites and deep blacks. As a Buffalo art critic once stated, “These works stand out more than any of his other work. They show a sensitive feeling for the patterns of light and shadow, for the grain of wood, and for the poetry of ships’ architecture.”[5] At his summer home in Thomaston, ME, O’Callahan’s close neighbors and friends were Andrew Wyeth and his family. The two artists became very good friends when Wyeth and his wife Betsy would come to East Aurora, NY, to visit her parents. The two artists would often sketch in and around the Buffalo area together.

During the 1940’s O’Callahan was regarded as Buffalo’s premier graphic artist and was well known nationally. He exhibited in numerous regional shows as well as in New York City, Philadelphia, Denver, San Francisco, Seattle, Washington, DC, and Laguna Beach. He often spoke on radio programs and also wrote on different graphic techniques. Around this same time, he taught etching at the Art Institute in Buffalo, NY, and they also honored him with a solo exhibition entitled “Prints and Drawings by Kevin B. O’Callahan” in 1944. Throughout his career, he was very active in the Albright Art Gallery (now the Albright-Knox Art Gallery) and became a life member in 1947, and in 1949 he was chosen to design the benefactors plaque for the gallery.

Circa the 1950’s, O’Callahan took a position teaching mechanical drawing at the University of Buffalo’s School of Engineering and taught there until he retired in 1968. It was around that same time that he moved from his mother’s home to Winspear Avenue which was within walking distance of the University. Later in his career O’Callahan had to contend with failing eyesight, eventually giving up all graphic printmaking. Sometime around 1952-53, O’Callahan retired as president of the Buffalo Print Club, and was succeeded by William J. Schwanekamp. After his departure from the Buffalo Print Club in the early 1950’s, O’Callahan did however manage to continue drawing, especially while on his summer vacations in Maine. His close friend Andrew Wyeth, in a personal letter to him written October 15, 1961, pleaded with him to continue drawing and wrote, “I consider your drawing the very best in the country.”[6]

In 1962 O’Callahan’s mother died, and it was at this time that he discontinued all artistic and graphic interests. Once he lost his enthusiasm for the creative process and printmaking, the Buffalo Print Club ceased to exist, though he did continue maintaining his studio on Niagara Street where he occasionally designed and built pieces of furniture. “For the last ten years of his life, O’Callahan became a forgotten recluse. His artistic accomplishments became totally forgotten, his memory remaining alive only with a few close friends, including Mrs. Jean McKay Henrich, Rixford Jennings and other former members of the Buffalo Print Club. Kevin O’Callahan died in 1977.”[7]