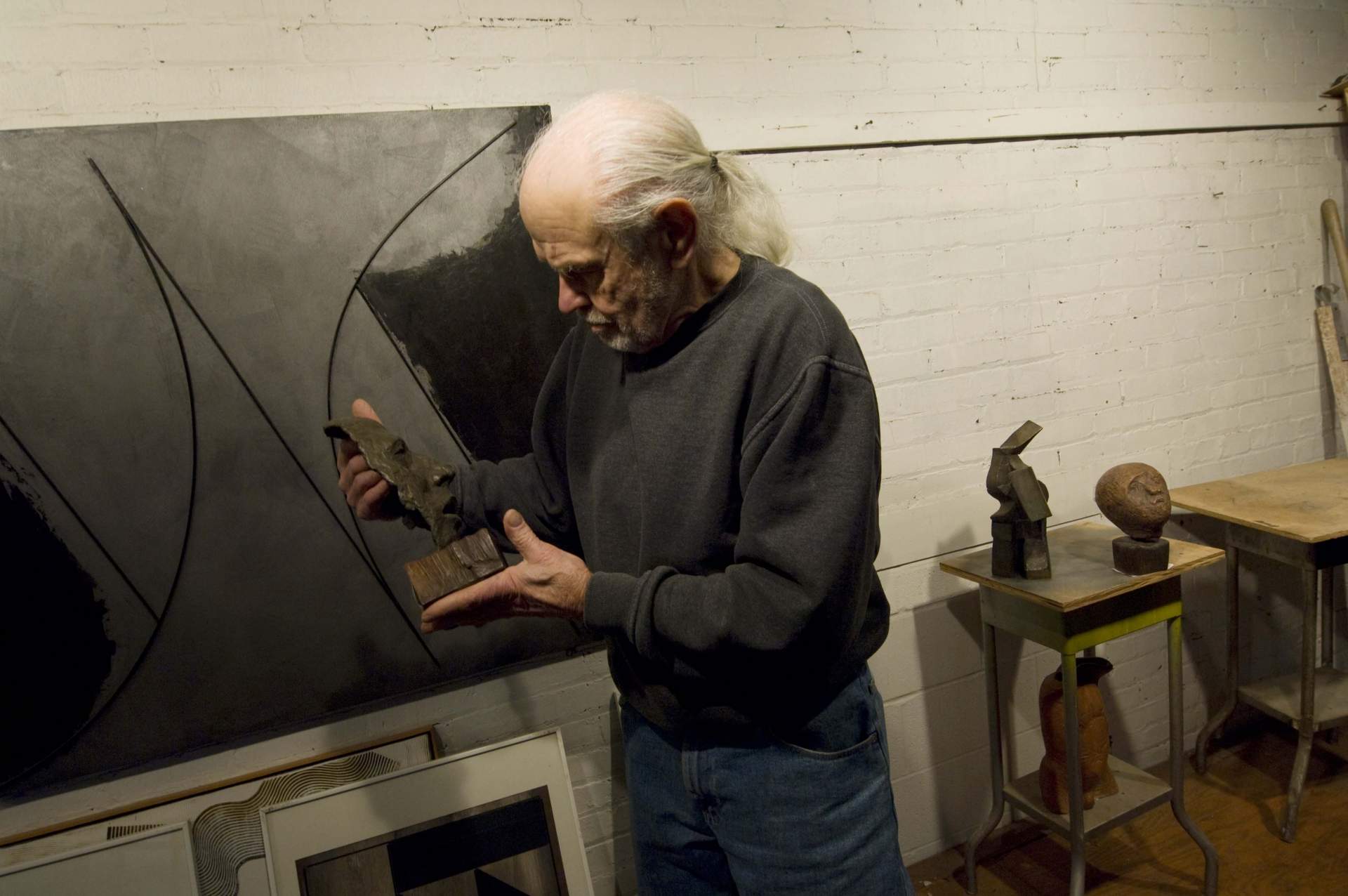 Duayne Hatchett was a visual artist whose work included prints, paintings, sculpture, and found objects. He was born on May 12, 1925 in Shawnee, Oklahoma. He enlisted in the Air Force where he  trained to become a fighter pilot. After leaving the militrary he studied design at the University of Oklahoma. His highly technical military training combined a mathematical intelligence with a love for physics and a daring embrace of new experience, all of which would soon be the tools for his evolution through art.

Two major influences interacted on his early development at OU. Emelio Omero, a colleague and close friend of Diego Rivera, introduced him to the revolutionary art ideas of Mexico City, while teaching him a wide range of printing techniques that would culminate in a Masters Degree in Painting in 1952. During this time he met Bruce Goff, a renowned Wright disciple, who was teaching architecture at OU and befriended Hatchett, introducing him to the most avant-garde architecture of that time.

He spent his summers while at OU designing for a small sign shop, which introduced him to new materials used for building neon, plastic, and metal signs. The use of new materials and a keen sense for design would soon become invaluable building blocks for future sculpture. During this time he met and married Mary Ellen Jeffries. They would spend their lives together and raise three children, David (me), my brother Dana, and my sister Jeffri. As children, they were immersed in art from childhood and benefited greatly from this loving art and domestic environment.

Hatchett was always interested in the techniques of construction, often watching different tradesmen working, understanding how materials are put together to create the manmade environment that surrounded him. While teaching printmaking at Oklahoma City University from 1951 through ‘54, he began to build sculpture employing some of the materials and techniques that he saw workers using. He was beginning to draw the attention of architects and he became interested in their work-trade processes, moving from blue prints to construction. He accepted an invitation from Alexander Hogue to teach sculpture at Tulsa University in 1954. He moved his family to Tulsa where he would teach for the next ten years.

While in Tulsa, he became well known as a teacher and a sculptor, often lecturing at various sculpture conferences around the country. He also began to obtain commissions for sculpture as his interaction with architecture continued to evolve. He began to meet and interact with some of the most influential New York artists, including David Smith, Louise Nevelson, Noguchi, and Chicago artist, Richard Hunt.

The 'found object' became important subject matter for many artists including Hatchett and his frequent trips to junkyards yielded the materials for welded sculptures that explored abstract forms suggestive of the world around him. Sources of inspiration ranged from a dead cat smashed on the road to Sputnik orbiting the earth. Alan Stone Gallery in New York City, arranged to show two of these pieces at the Museum of Modern Art in 1963.

He was offered a teaching job at Ohio State University in 1964, where he would teach sculpture for the next three years, and make a leap of imagination that would propel his art into the museums and galleries in New York City and beyond. He began by moving away from combining found objects to using found materials to fabricate objects that he called "Totems." Royal Marks Gallery in New York City began to represent Hatchett in 1964 and arranged for him to be included in the ‘Young American Sculpture East to West’ show representing the United States in the 1964 New York World’s Fair. He would then leave any hint of the found object or junk material behind (until the 90’s) and move into pure abstraction, what can only be described as 'Modern' Art.

Taking his cue from modern architecture, he began to draw simplified volumes and planes, minimally rendered, so as to be easily grasped as a whole. Built with industrial materials, sheet metals and plastics, the images suggested the look of modern technology and architectural accuracy in the environment. These new works resulted in multiple one-person shows, including shows at Royal Marks Gallery in 1965, ’68, ’69, and ’70, and defined a major shift in his work that would be played out for the next two decades. He was featured on the cover of the Whitney Annual and the Whitney Museum acquired a large sculpture in 1967. He was included in the American Sculpture of the Sixties show at the Los Angeles County Museum and the Pittsburgh International, at the Carnegie Institute Museum of Art that same year.

In 1968 he took a teaching position at the University of Buffalo where he would head the sculpture department for the next 24 years and he would move his art in multiple directions. He began a series of paintings to exploit the simple line drawings previously used to define the plate metal sculpture. These paintings explored the optical relativity of two and three-dimensional space depicted on a flat plane. He was also continuing to develop his geometric minimalist sculptures, landing several sculpture commissions around the country. In 1974, the Albright-Knox Art Gallery in Buffalo, NY presented, Duayne Hatchett: Recent Paintings and Sculpture. In the ensuing years his work would be shown in one person and group shows around the country. In the studio, the confluence of construction and the 'Found Object' re-entered his work in a completely unexpected way. Construction itself became the creative engine transforming his new art.

New tools and working processes were adopted or invented to create new art. The trowel would replace the brush for building new paintings. Tools for rolling and burnishing metal would be invented and riveting would be adopted to build new sculptures. He was influenced by the characteristics of materials and objects such as corrugated sheet metals, the optical effects of plastics, metal grates, tin cans, seen in his man made environment, as well as crosscut tree logs and drift wood from his natural environment. He began to build sculptures, in the privacy of his studio, largely unseen by the public.

In the late 90’s, the found object re-emerged in the form of new sculpture created from railroad spikes welded together to form organic conglomerations reminiscent of nature. He also began to build assemblages of found objects and materials that maintained a continuous flat surface, which were simultaneously sculptures as well as being blocks for prints. By utilizing a wide range of printing techniques that he invented, he made mono-prints that record the image of the assembled material constructions, greatly extending his previous uses of the found object, and greatly expanding the imagery in his printmaking.

From printmaking and painting of the late 40’s, influenced by Mexican Art, through the junk metal used from found objects in the 50’s and early 60’s, through the minimalist sculpture and paintings influenced by modern architecture from the 60’s and 70’s, to the paintings, sculpture and printmaking of the last forty years, Duayne Hatchett has developed a personal expression that solicits a universal response. His unique visual language has been created through the invention of tools, the manipulation of various materials and objects, which he presents in a unified form. These expressions reflect our environment, specifically and generally, as objects once in use or patterns at play. Hatchett’s art works are interactive vessels that hold their content as potential energy, waiting to unlock our memories and our senses through the act of observation.