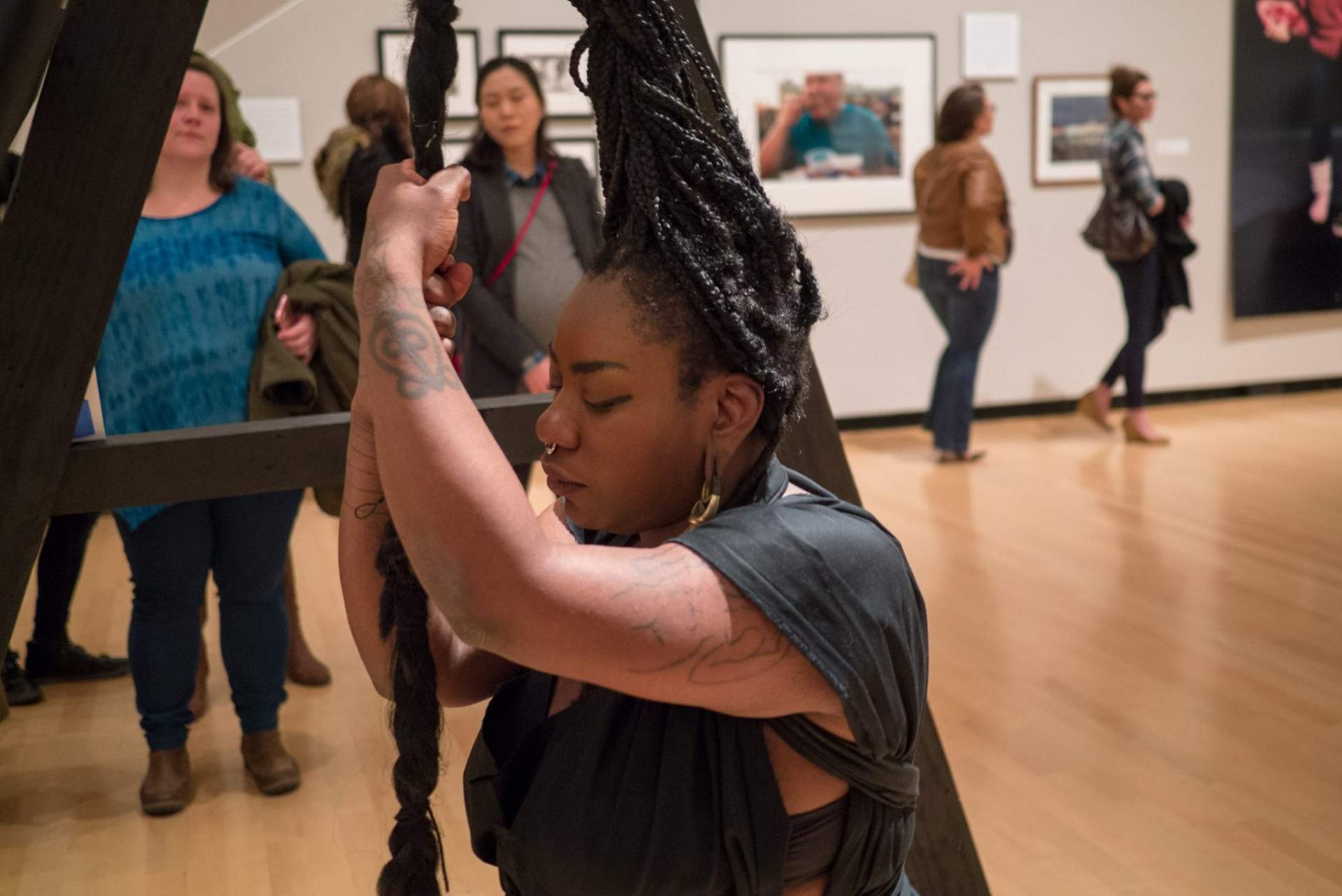 Dana McKnight is part of the Living Legacy Project at the Burchfield Penney Art Center. Click here to listen to her artist interview.

Dana McKnight is a multimedia artist from Buffalo, New York, whose work combines illustration, experimental sound, sculpture, installation, performance art, painting, speculative fiction and poetry. McKnight’s identity and subsequent experiences as a Black, queer woman are at the forefront of many of her works and artistic ventures. “At the core of Dana McKnight's work, lies a surreality--- the real world slowly picked apart through a lens tinted by magical realism and lived experience.”[1]

While McKnight was raised on the East Side of Buffalo, she has not stayed there her entire life. Well versed in travel, she studied in Japan for two years, then moved to the Netherlands. It wasn't until 2008 that she moved back to Buffalo. Most recently, McKnight has relocated to Austin, Texas. During her many travels she studied Cultural Anthropology at Long Island University, Sculpture in the Netherlands, art and has even trained in blacksmithing.

She notes that during her time in the Netherlands, she experienced racist attitudes, partially causing her to move back to Buffalo. Themes of race, identity and their place in our society can be seen throughout many of her works. Her video work, White Consumption Mac & Cheese, features a white man being served mac and cheese by a black hand. As he consumes, a mix of artists including Michael Jackson, James Brown and Stevie Wonder is played. For McKnight, this is a representation of the way culture, specifically black culture, is consumed by society. She notes this in a statement accompanying the video:

“At its core, WC-Mac & Cheese is about consumption. Specifically, a white consumption of Black Music and Spirit. Like the iconic American Macaroni & Cheese; black culture has been stripped, pared down and blue-boxed for retail with little to no regard to the riotous ingredients that made the original recipe so delectable.”[2]

In January 2017, she exhibited her performance piece, Trussed, at the Burchfield Penney Art Center and the Box Gallery. Using a swing set built to resemble gallows, 5 feet of braids are attached as a pulley system that McKnight uses to hoist herself up by her dreads. The piece is a critique of the pressure black women have historically faced to straighten their hair and fit into societal norms. This pressure to have “acceptable” hair can lead to painful tactics for straightening - relaxers, hot combs, flat irons, etc. - which can have long term traumatic effects.[3]

McKnight offers a place of refuge for various marginalized groups with the creation of an alternative, safe space for avant-garde artists and patrons in the Buffalo area. She is the co-founder of Dreamland collective, a non-profit organization centered on building an inclusive environment for queer, women, transgender and minority artists in the community. Centered on donation-based events, the collective strives to be both accessible and community oriented. Events have included live figure model drawing classes, sex education and women’s defense classes. The collective’s space has also been used to host performances and exhibitions.

“If people need to check their attitudes, it’s done at the door. Needless to say, misogyny and homophobia are not tolerated. McKnight says that people respond really well to these common-sense guidelines, and that they have rarely, if ever, have to enforce any rules. People just self-police, she says.”[4]

Originally operating out of 387 Franklin Street, the collective is in the process of relocation. They have been successful in garnering community support to help them file as a nonprofit organization, their hope is that the community will continue as they search for a new space.

McKnight was a recipient of the 2019 Summer Workspace Residency at Squeaky Wheel, where her research and art focused on "Micro-Fantasy and Black Speculative Fictions on the East Side."