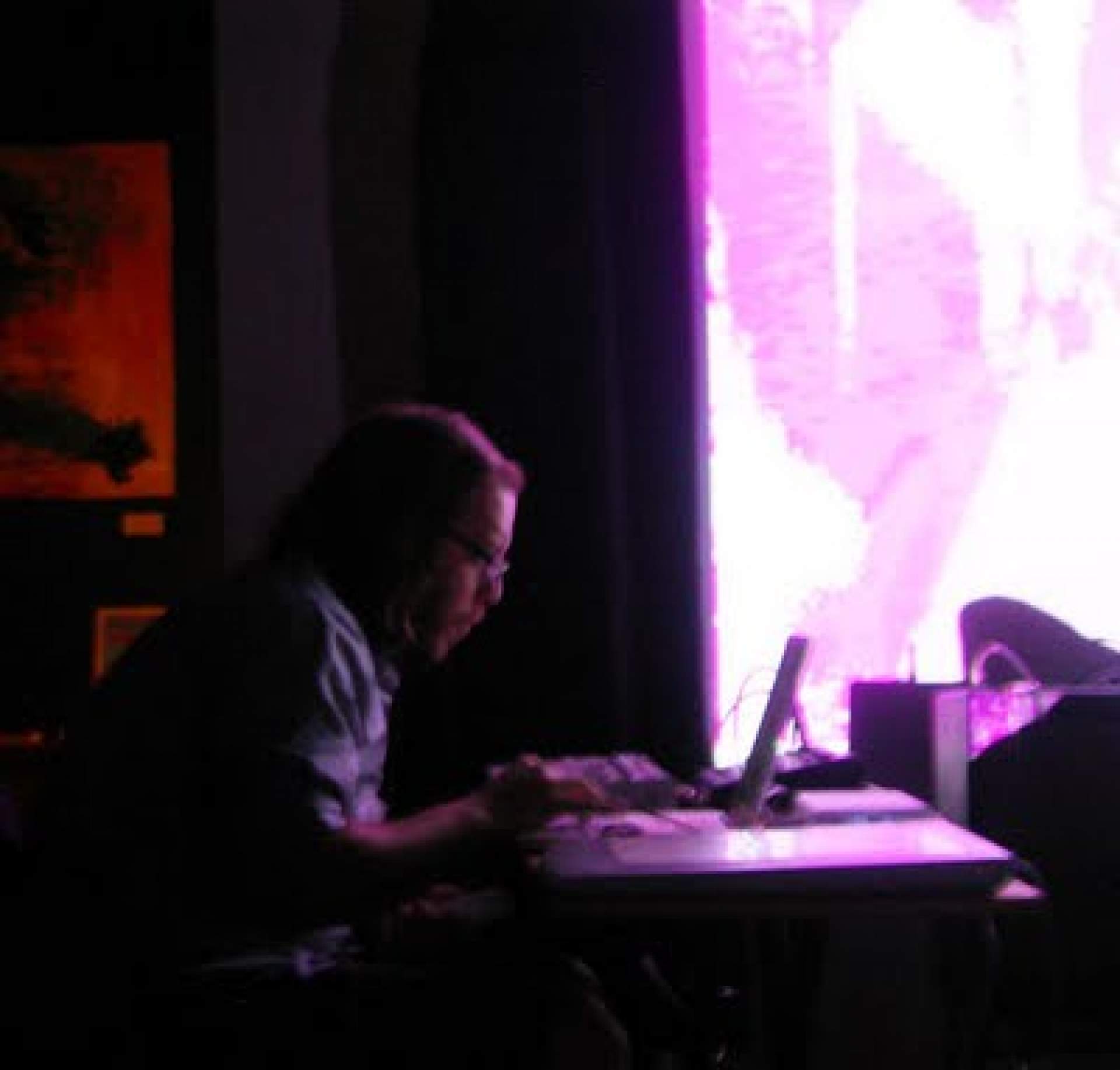 Born and raised in Buffalo, N.Y., Brian Milbrand is a multidisciplinary artist whose work incorporates video, film, live performance, audio, and painting, often in combination with each other. He attended the University at Buffalo, where, he recalls, “I originally wanted to be a scientist and study genetics, but then I took a basic film class in the second semester of my sophomore year and it sort of ruined my life. [laughter]… But science and math are still really involved in what I do, like in digital and audio manipulation. A lot of the software I use involves numbers.” [1] Milbrand received a B.A. in media study from the university in 2002, by which point he was already a prolific contributor to the Western New York arts community, in part through his role as a founding member of Kamikaze Gallery & Media Center, a live/work space in downtown Buffalo. Like the other core members, he was in his early twenties; together, they used the combination gallery and performance space/microcinema to exhibit their own work and that of guest artists on a monthly basis. Both individually and in collaboration with each other, the Kamikaze artists created work in a variety of media, including visual art, film, video, and performance. Drawing inspiration from artists like Chris Burden, Yoko Ono, and the Fluxus group as well as horror films, Milbrand’s early contributions were both confrontational and deeply personal, as he told an interviewer in 2006: “The [performances] were very much about audience interaction. … [W]hat’s the point of performing in front of an audience if you’re not going to use them? But the first stuff I did at Kamikaze was very physical for me … getting tortured, being shocked, drinking syrup of ipecac before going out to do a one-man performance of Waiting for Godot, which I’d never read before.” [2]

Although the venue/group was only active for a single season [2002-3], Kamikaze provided a much-needed forum for a new generation of interdisciplinary artists from the area. After the organization disbanded, Milbrand and Tom Holt, another of the founding members, continued to collaborate on visual art, media, digital, and performance projects while also pursuing solo careers. One of their most ambitious early post-Kamikaze ventures was 24:48 at the Burchfield Penney Art Center in 2003, a 48-hour long endurance performance (subdivided into 24 2-hour installments) by the duo and an invited group of more than 20 other painters, actors, musicians, writers, and other artists; video documentation of the ephemeral works they created formed the content of a subsequent gallery installation.

In addition to Holt, Milbrand has collaborated with a number of other Buffalo-based individuals, including writer/performer/media artist Holly Johnson (most notably on The Claire Cycle [2003-08], a series of three shorts and one feature exploring Jungian archetypes through parodies of several film genres), experimental/documentary video artist Meg Knowles (he coproduced her 2013 feature, Runaway, and the pair have worked on many shorter tapes together), writer/performer Ron Ehmke (creating nonlinear live performances under the name Headless Baby, instigating Fluxus-inspired “actions,” and appearing frequently in each other’s multimedia projects), and architect/set designer Brad Wales (his partner in conceptualizing and constructing the Burchfield Penney’s massive Front Yard projection installation, as well as many theater, dance, and film projects). Milbrand has also been a major figure in several arts collectives--including the Real Dream Cabaret (with featured roles both onstage and off in such plays as The Shell of Sense, WoyUbu, and The Outlaw Show), the Reactionary Ensemble, Nimbus Dance, and Termite TV--as well as a contributor to productions by Torn Space Theater, the Subversive Theatre, Theatre of Youth, and the Buffalo Philharmonic Orchestra, among other Western New York cultural organizations. In 2013, he made the documentary This Doesn’t Happen Here, about the work of the Erie County Fair Housing Partnership, for Squeaky Wheel/Buffalo Media Resources’ Channels: Stories from the Niagara Frontier initiative.

While many of Milbrand’s videotapes and performances might be considered examples of “abject art,” intended to provoke strong reactions from viewers and welcoming controversy, another strain of his filmmaking and visual art explores formal issues raised by the very nature of film and painting. Influenced by such precursors as Hollis Frampton, Stan Brakhage, Tony Conrad, Steina and Woody Vasulka, and Paul Sharits, these more Structuralist works tend to be abstract and nonnarrative. For example, in his “melts,” Milbrand freezes watercolor paints into ice cubes and films them as they slowly melt, projecting the process on canvas or another surface. In his work with dance and theater companies, he often uses multiple video projectors showing found footage that is digitally processed in real time, and/or film projectors running long loops of film that he drips paint on as frames pass him.

"As an artist, I definitely subscribe to the 'make it work' aesthetic," Milbrand has written. "You make art with whatever you have available, and do what you can within those constraints. I don't let not having the latest media equipment stop me from making media. I'm a little dumbfounded when I come across artists who won't work unless it is under pristine conditions, unless they have all the best equipment they read about in the latest tech blog. I wonder what is their motivation for making art in the first place. For me, art is something that has to be made, and borders on obsession. Granted, I like having the latest equipment when I can get it, and am happy that my budgets are increasing to the point that making it work is a little easier, but if I were still making art for free, I would still be making it, whether it was HD or Super 8 or even VHS."[3]

Milbrand’s live performances, installations, films, and videos have been presented nationally at the Museum of Modern Art, Scope New York Art Fair, PS 122, the Richmond Moving Image Co-op, Artists Television Access, the Athens International Film and Video Festival, the Detroit Film Center, and the Philadelphia Museum of Art. In addition to venues listed above, his work has been shown in Buffalo at Hallwalls Contemporary Art Center, the Carnegie Art Center, Soundlab, Big Orbit Gallery, and in the Suburban Samizdat series. He has received funding from NYSCA’s Individual Artists Program, Tonawanda’s Council on the Arts, and Medaille College’s Faculty Development Grant; and residencies at Squeaky Wheel and the Experimental Television Center. Milbrand was named Best Video/Film Artist by Artvoicein 2008, 2009, and 2010, and Most Provocative Experimental Artist in Any Artform by Buffalo Spree in 2009.

In addition to his artistic career, Milbrand has been an adjunct professor of media technology and a multimedia technician at Medaille College, and was the technical director at Squeaky Wheel, later serving on the organization’s board of directors. As of 2009, he has been the equipment manager/technical assistant at Buffalo State College, as well as teaching courses in the communications department. He is married to fellow artist Holly Johnson.

Many of Milbrand's films may be screened online at blip.tv/mario-paint.