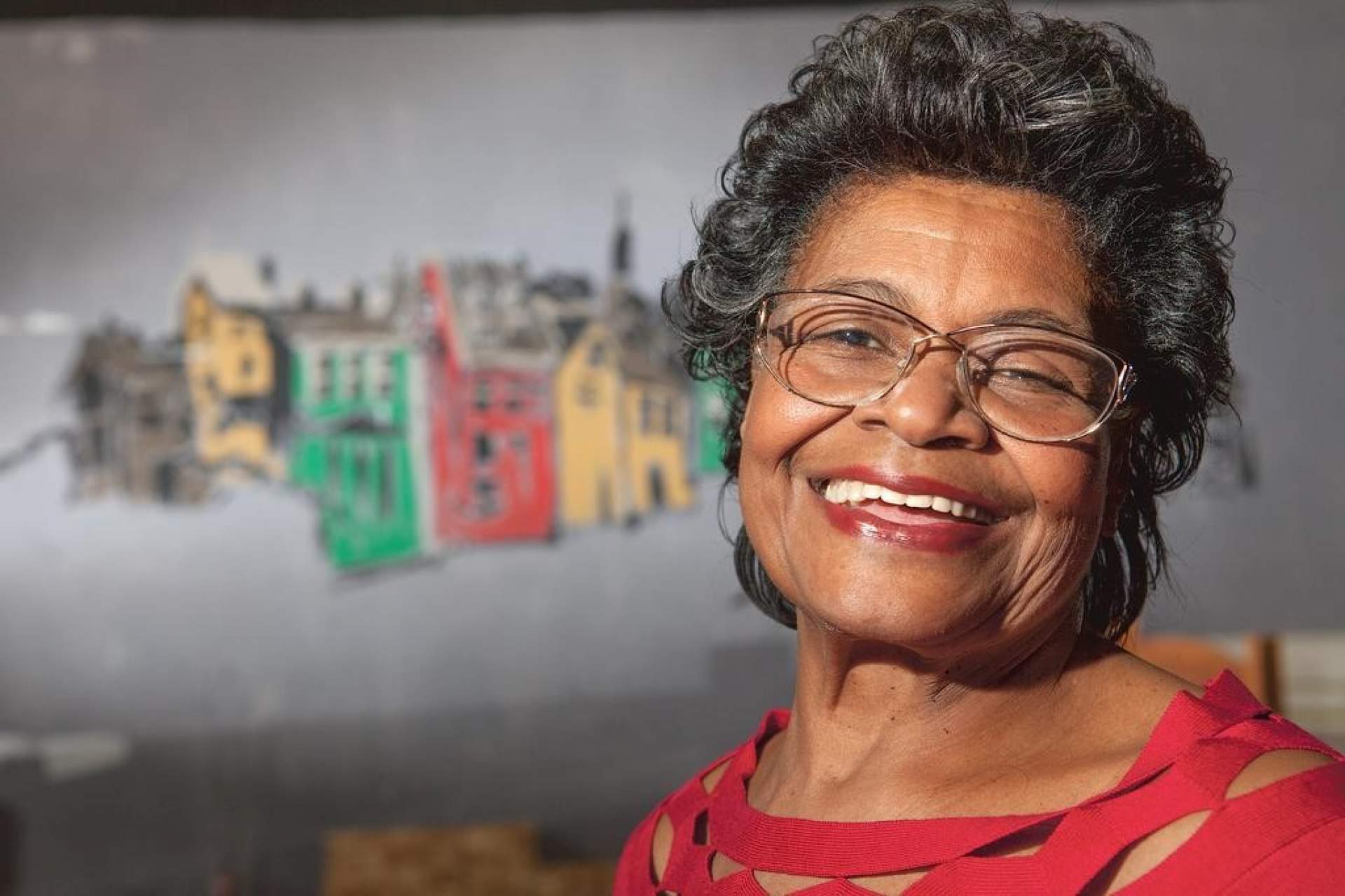 Agnes Bain was a leader and influential member of the Western New York arts community. She served as the longtime Executive Director of the African American Cultural Center (AACC), and over the course of her 42-year career, led the Center in expanding its programs and overall influence throughout Buffalo’s East Side. Founded in 1958, the AACC celebrates and uplifts black heritage across the diaspora, providing a communal space for people of all ages to engage with a range of art forms and develop an understanding of and appreciation for their cultural heritage. Through its variety of programs, which include the AACC Dance & Drum Performance Company, the Paul Robeson Theater, Cultural Enrichment Programs and the Jumpin’ Jambalaya Summer Program, the organization encourages the exploration of one’s creativity, personal growth and an overall positive sense of self among African American youth and other traditionally underserved communities.

Bain, who spent her entire career at the AACC, was essential in securing the grants and community partnerships that have proven crucial to the continued expansion of the Center’s reach. Her honesty, fortitude and resolute dedication to her work transcended any challenges the Center may have faced over the years. In a 2016 interview with Buffalo Business First, she talked about Buffalo’s renaissance and in her eyes, the public’s central focus on the growing medical campus. While this has seemingly taken funding sources away from supporting the AACC’s mission and those of similar cultural institutions, Bain accepted the challenge of adapting the AACC’s programing to remain relevant and necessary in evolving times. The African Drum & Dance Company, she mentioned for example, began hosting more workshops in senior citizen facilities to promote both the cultural significance of the African drums and the health benefits associated with the movements.

The evolution of such programs to reach new audiences has been a welcome change, however serving the East Side community remains at the forefront of the AACC’s mission. Bain told Buffalo Business First that despite the growing popularity of Canalside as a premier events space, she refused to take the Pine Grill Jazz Reunion, one of the AACC’s major programs, there in future years. A lover of jazz, Bain and others initiated the Pine Grill Jazz Reunion in 1989 to honor the local, national and international artists who have carried and continue to carry on the legacy of jazz. The free concerts take place the first two weekends in August in Dr. Martin Luther King Jr. Park on the East Side, which has assured accessibility to the community for the past 30 years.

Bain’s involvement in sustaining cultural institutions extended far beyond her work at the AACC. She served on several boards, including the Arts Council of Buffalo and Erie County, the East Side Coalition of the Arts and the Niagara Frontier Folk Art Council. Bain was also a past member of Buffalo’s Art Commission and former panel member to the New York State Council on the Arts/Special Arts Service Program. She has been widely recognized for her contributions to the arts community, receiving several awards and honors throughout her career.

Despite her long list of personal and professional accomplishments, Bain’s legacy is most apparent in the lasting impression she’s left on the thousands of youth who have attended programs at 350 Masten Ave. over the years. In an interview for Uncrowned Queens: Voices of African American Women, a collaborative radio project between the Uncrowned Queens Institute for Research and Education on Women and WNED, Bain described the children she worked with as her biggest source of motivation.

“If I can be a small part in just being able to let someone know, if no one else but that child, that they have a talent that needs to be exposed, that’s what’s important to me,” she said.

Though she had no children of her own, Bain became a maternal figure to countless children who viewed her as a person they could trust in times of need. Many of the students she’s built relationships with remain active with the center for years; her staff consists of former students she met at just 5 and 6 years old.

Bain exhibited the quiet and maternal, yet commanding personality she was so well known for at the Center from an early age. A Buffalo native, she was known to some by her childhood nickname Cookie, her sister Alforna Evans recalled on Uncrowned Queens. When the family moved into a new neighborhood where they were the only black family, Cookie, who was always easygoing and friendly Evans said, managed to woo everybody.

Undoubtedly a community-oriented person, Bain had a profound appreciation for the arts and for local artists. She produced over 80 African American productions, working with several notable names in the industry. She was an advocate for African American artists of all ages. Her dedication to supporting the arts earned her the community’s undying love and respect. She did not consider herself an artist in the traditional sense, but was known for her love of cooking, a trait she got from her mother. She viewed it as an artform, and this passion followed her into her adulthood, manifesting into the various cooking classes she taught at the center.

She took a similar artistic view of the work that she did to lead the Center and guarantee its longevity.

“She takes business as an art form. She has a way of making change and making it work for you,” AACC Assistant Director Alicia Banner told Uncrowned Queens. “She has a way with everyone.”

Agnes Bain passed away on January 28, 2020 at the age of 78. Her unwavering passion for all she did and her commitment to the community she served will surely be missed by all those who knew her, worked with her and loved her. Bain’s legacy, however, is eternal, and lives on every day in the many lives she touched and in the African American Cultural Center.