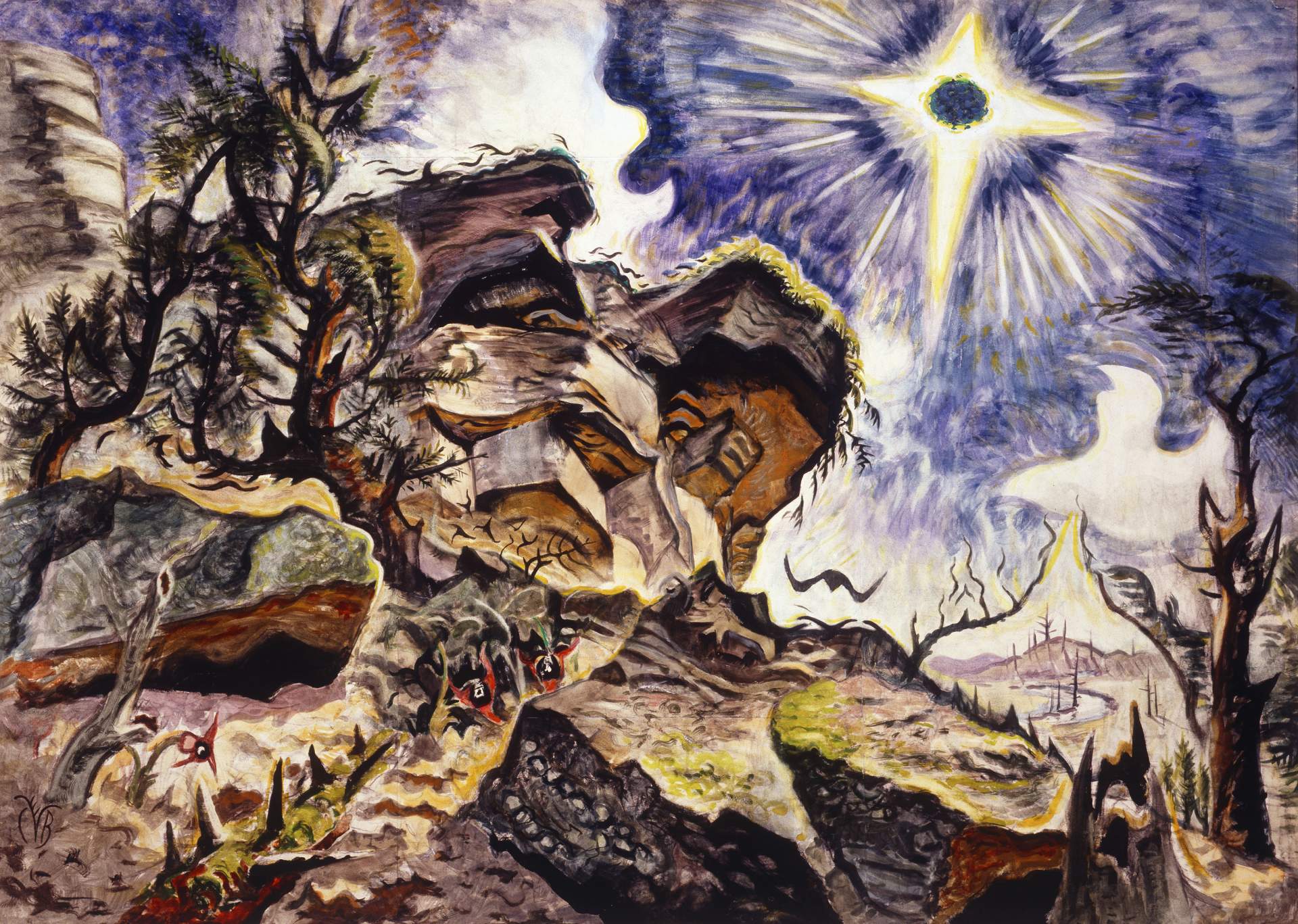 watercolor on gouache on joined paper mounted on board

Burchfield revealed in his journals the profound influence of Jean Sibelius' Symphony No. 4 in his creation of Sun and Rocks in this entry (in Volume 49, April 21, 1948, pp. 60-61), among others.
Apr. 21 (Wed.)
Much colder in the night – Cold damp wind from the North, tasting of snow – Long sweeping layer clouds with cold white rifts (the glad white rifts, forerunners of the sunshine about to break them). –
[Burchfield bracketed this entry with red pencil]
[How such sudden changes in weather fires the imagination – Winter retreating to the north, turns now & again and makes a vicious sully against the onrushing Spring, leaping out suddenly from hiding in the black ravines, lurking in the black cavities under rocks, and in the black shadows of trees.
The other day, after having painted all day among the Rocks, I played the Sibelius Fourth Symphony — the impression of the rocks and the music intermingled, each magnifying the other, and presently I had a vivid inner eye picture of a strange fantastic scene in some unknown North land – a vast open canyon, with the sea at one end, sides of the canyon composed of the same sort of prehistoric weathered rocks as in Rock City, only on a grander scale with deep ice-locked caves. Oh that I could actually wander into such a place!]

A cross of light bursting from behind a black sun in Sun and Rocks represents the perfect alignment of the earth, moon, and sun in a full solar eclipse, paralleling nature, the artist, and God as they converge in Burchfield's imagination. The painting exemplifies Burchfield's romanticism as it merged with his later Christian beliefs. He once described his original intentions:

An attempt to depict a scene in primeval times, in early spring, when conflicting forces of nature hold sway and seem to fill the earth with violence and chaos.  A great cliff, shaggy with ferns, juts up into the sky; from it, forced loose by the relentless process of erosion, huge boulders have tumbled down the hillside.  Among them, hemlocks, torn and twisted by the violence of wind and storm, have managed somehow to sustain life; here and there also, a few wild ginger plants have ventured forth.

Shining from the deep blue cavernous sky, the spring sun--our great day-time star--floods the scene with brilliant light that will heal the wounds of the earth and bring forth new life.

Sun and Rocks began in 1918 with a small watercolor (about 26 by 20 inches) entitled Song of the Peterbird. Burchfield intended it to be the visualization of Beethoven's Fifth Symphony (although he earlier he had credited Beethoven’s Fourth Symphony) which had "overwhelmed" him "with its elemental force and power." The third movement, he recorded, "seemed to me the expression of titans engaged in boisterous play; as though they might skip about from mountain to mountain and even at times hurl enormous chunks of rock at each other in sport to the accompaniment of thunder and wind." The painting did not capture the monumentality of the music, but Burchfield saved it and reviewed it periodically over the ensuing decades.

In 1943 Burchfield invented a new technique to expand the promising ideas of earlier works. He pasted small original paintings onto a large backing board using wheat paste, sponges, and rollers. Then he added new pieces of paper, usually around all four sides, on which he extended and embellished the original composition. Sun and Rocks was enlarged and repainted over several years. In 1948, Burchfield "put into the sun all the devastating destroying power of that ‘star’ that I feel on a March Sap day." The cruciform star glorifies Christian hope, hinting at both the star ofBethlehem which signifies the birth of Christ, and the cross ofCalvary, which signifies his crucifixion and resurrection. Burchfield said, "The Bible calls it the `great day star'... so brilliant and its blaze of light so strong it becomes a diamond shape to me." The image stands for Burchfield's relatively recent "enlightenment"—his conversion to Lutheranism four years earlier.