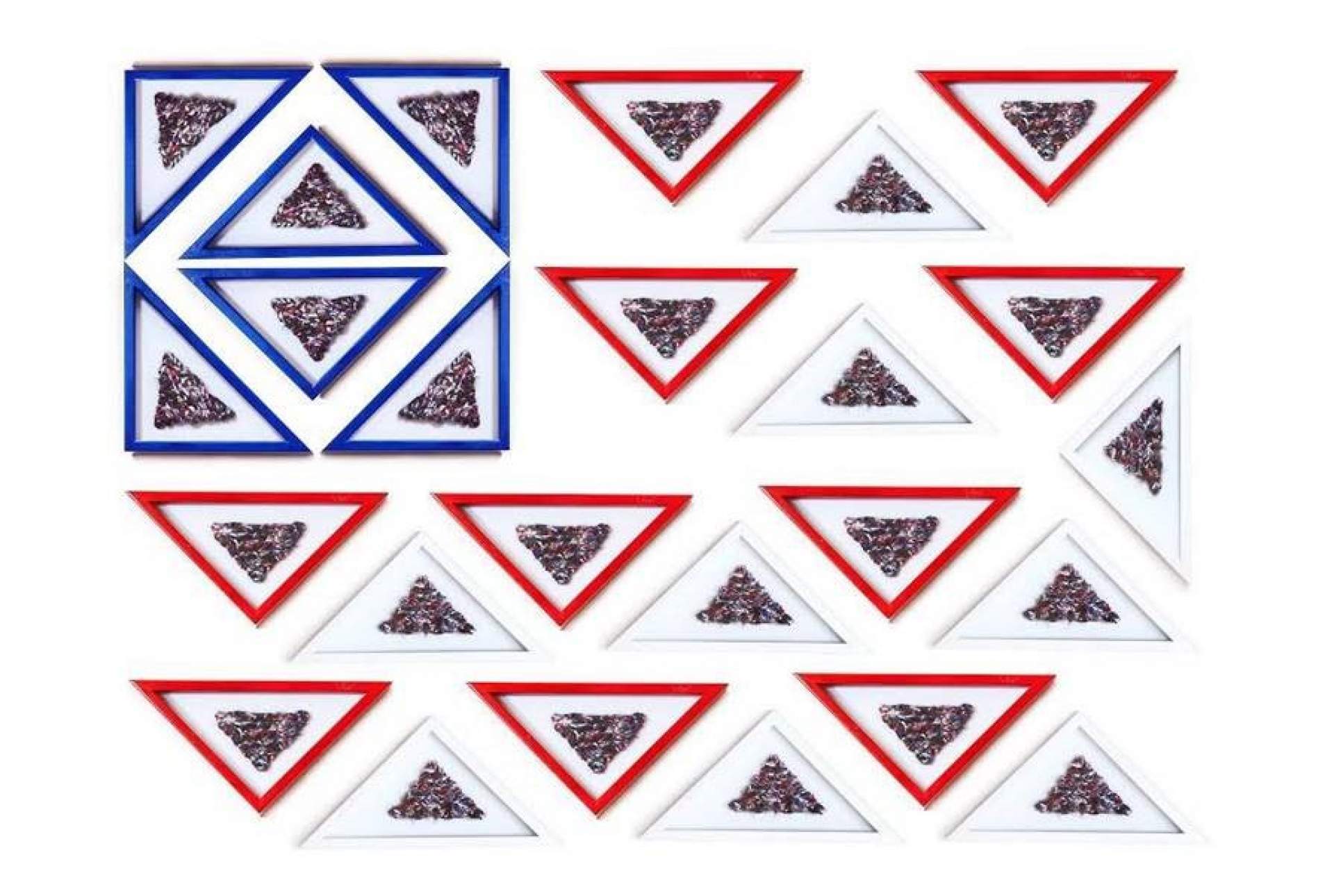 Diane Bush provided the background for this political satire after pondering Donald Trump’s history of sexual assault and harassment with little consequence (after he bragged that he would “grab them by the pussy” and creating a title that puns on his 2016 campaign slogan.

Starting in August of 2019, I began to prepare for my usual pre-election satire project, by creating “MAKE A MERKIN GREAT AGAIN.”  Merkins are genital wigs that are used for stage and screen; but originally, as early as the 1400s, they were used to beautify a pubic area that was shaved to prevent lice. Anyway, I was already spinning (by hand) my cat's fur, and I knew I wanted to use it for a satirical piece. My husband, the ever- so- clever Steven Baskin, came up with the concept. Now I just [had] to make 26, one for each sexual harassment accuser that Trump has abused over the years. I came up with the idea of putting them in Veteran Flag Frames, for an added touch of irony.

She exhibited “one huge square of them for a show in October” and she “created a soft version for easy shipping” that was exhibited in Bilbao, Spain, as part of their annual MEM Experimental Arts Festival. A documentary video of Diane Bush explaining the work at Hallwalls in connection with one example shown in the members’ exhibition can be seen on YouTube: “Member’s Show Artist’s Talks—Diane Bush, YouTube, August 8, 2019, 3:48 https://www.youtube.com/watch?v=XEeasyIK8UI

In 2006, the Burchfield-Penney Art Center gave Diane Bush a solo exhibition, Talking Pictures, as part of the series, 24/12, while Bill Stewart had a solo show in the adjacent gallery. She and Steven “have a history of using mass- produced commercial materials and tools for our work, as you may remember the plastic Radio Shack voice frames used in our TALKING PICTURES series that was shown at the Burchfield.” In regard to Make a Merkin Great Again, she said, “The use of cheap, over-the-counter flag frames, and common spray paint, is intentional.”