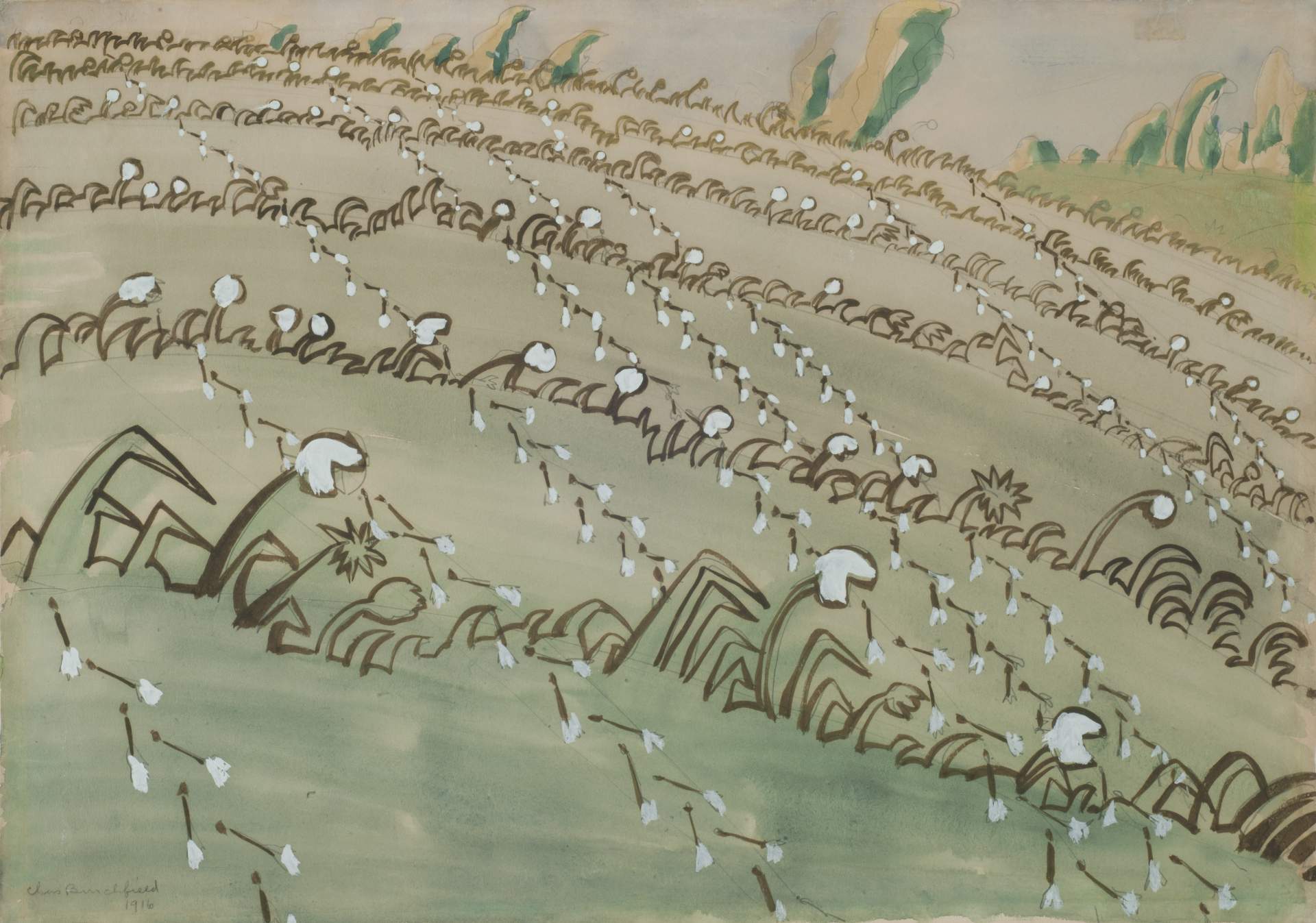 watercolor and gouache with pencil on paper

On February 26, 2014, the Burchfield Penney Art Center made the winning bid on a long-lost early Burchfield watercolor with an interesting history that was uncovered through research using the museum’s unparalleled archives. Here is an account of how I identified the work and its importance—both in Burchfield’s career and for the museum’s collection.

In January, a cataloguer from Christie’s in New York contacted me for information about a Charles Burchfield painting called “Dandelion Field.” Christie’s was preparing for an upcoming auction of American art in February. With increasing frequency, people contact the Burchfield Penney Art Center because it is the museum and national study center dedicated to Charles E. Burchfield. The museum has the world’s largest collection of the artist’s works, as well as the most comprehensive archival collection relating to his career. Our Charles E. Burchfield Archives include the artist's journals, painting indexes, correspondence, and photographic records, with special collections relating to the two main New York City galleries that represented him during his life: the Frank K. M. Rehn Gallery (1929-1981) and the Kennedy Galleries, Inc. (1976-2005). In addition, the Charles E. Burchfield Foundation Archives is comprised of 25,000 objects, primarily studies and notes that provide insight into the artist’s life and career. As the only Burchfield scholar authorized by the Burchfield Foundation do conduct authentications, I relish the detective work involved in researching previously unknown works.

Stylistically, the watercolor and gouache painting looked true to Burchfield’s early decorative designs, and he had recorded the date “May 1916” on the back. At first I did not find any information about a work called Dandelion Field, but there was a promising similar title of Drifting Dandelion Seeds in Joseph Trovato’s 1970 publication, Charles Burchfield: Catalogue of Paintings in Public and Private Collections. This book, published by the Museum of Art of the Munson-Williams-Proctor Institute in Utica, is the closest to a catalogue raisonné that has yet to be printed (although the Burchfield Penney has been compiling information to update and expand the 44-year old book.) While the listed size and horizontal format matched, there was no corroborating information or images in our Burchfield artwork document files, Burchfield’s handmade Painting Index, the Frank K. M. Rehn Gallery photograph files, or the 1967 slide documentation of his estate.

The Trovato listing, however, contained a few more nuggets of information that led my hunt in a few directions. First, the Straus number 133 corresponded to an earlier inventory of Burchfield’s work. John W. Straus was the first undergraduate at Harvard College who was granted permission to write his honors thesis on a living artist. He interviewed Charles Burchfield, documented “An Account and Analysis of his Production,” and created a catalogue of hundreds of his paintings in 1942.  Although the painting at Christies is clearly dated “May 1916” on the reverse, Straus lists Burchfield’s description of Drifting Dandelion Seeds as “Winged dandelion seeds scattered obliquely across the overlapping layers of a hayfield by a fresh June wind”—words that aptly describe the image, but do not match the date.

Trovato also listed the painting’s single exhibition history in Charles Burchfield: Early Watercolors 1916-1918, held at the newly opened Museum of Modern Art at Fifth Avenue and 57th Street in New York April 11-26, 1930. As artist Robert Gober pointed out in 2009, when he was guest curator of Heat Waves in a Swamp: The Paintings of Charles Burchfield, it was “the institution’s first one-person exhibition”—a highly significant achievement, both for Burchfield and for American art history. For Heat Waves in a Swamp, we helped Gober track down as many of the original paintings from this exhibition to include in the traveling retrospective—but this was one of the few whose current owner was unknown. The fifth work listed in MoMA’s 1930 catalog, Drifting Dandelion Seeds, was lent from the collection of “Thomas Metcalf, Boston” and was described with exactly the same words used by Straus: “Wingéd dandelion seeds scattered obliquely across the overlapping layers of a hayfield by a fresh June wind.” Verifying the correct title now seemed likely.

Next, I tracked down a connection with Thomas Metcalf through a reference in Burchfield’s Journals. On January 3, 1940 he quoted a letter from his dealer Frank Rehn stating that “Our friend Metcalf up in Boston fell in love with the ‘Swamp in Spring’ (a great favorite) – Some years ago he bought an early one for 450 – as I asked 900 for this he offered to swap, and pay 450 additional. I could not say ‘no’ as it is not like swapping an old picture for a new – and I’m really glad he’s gotten it.” Although Drifting Dandelion Seeds was not mentioned by name, the reference to “an early one” helped me conclude that we were connecting the dots. Burchfield himself owned the painting in 1942, when Straus documented it; but where it had gone from there was not on record—at least, not until now.

Christie’s New York in Rockefeller Center put the painting up for auction as Lot 177, estimated to sell for between $8,000 and $12,000—a modest amount for one of Burchfield’s early paintings with such an interesting history. With the backing and approval from the board of trustees, the Burchfield Penney Art Center placed the winning bid on February 26, 2014; thus welcoming this little treasure into the collection. We plan to exhibit it in the near future.